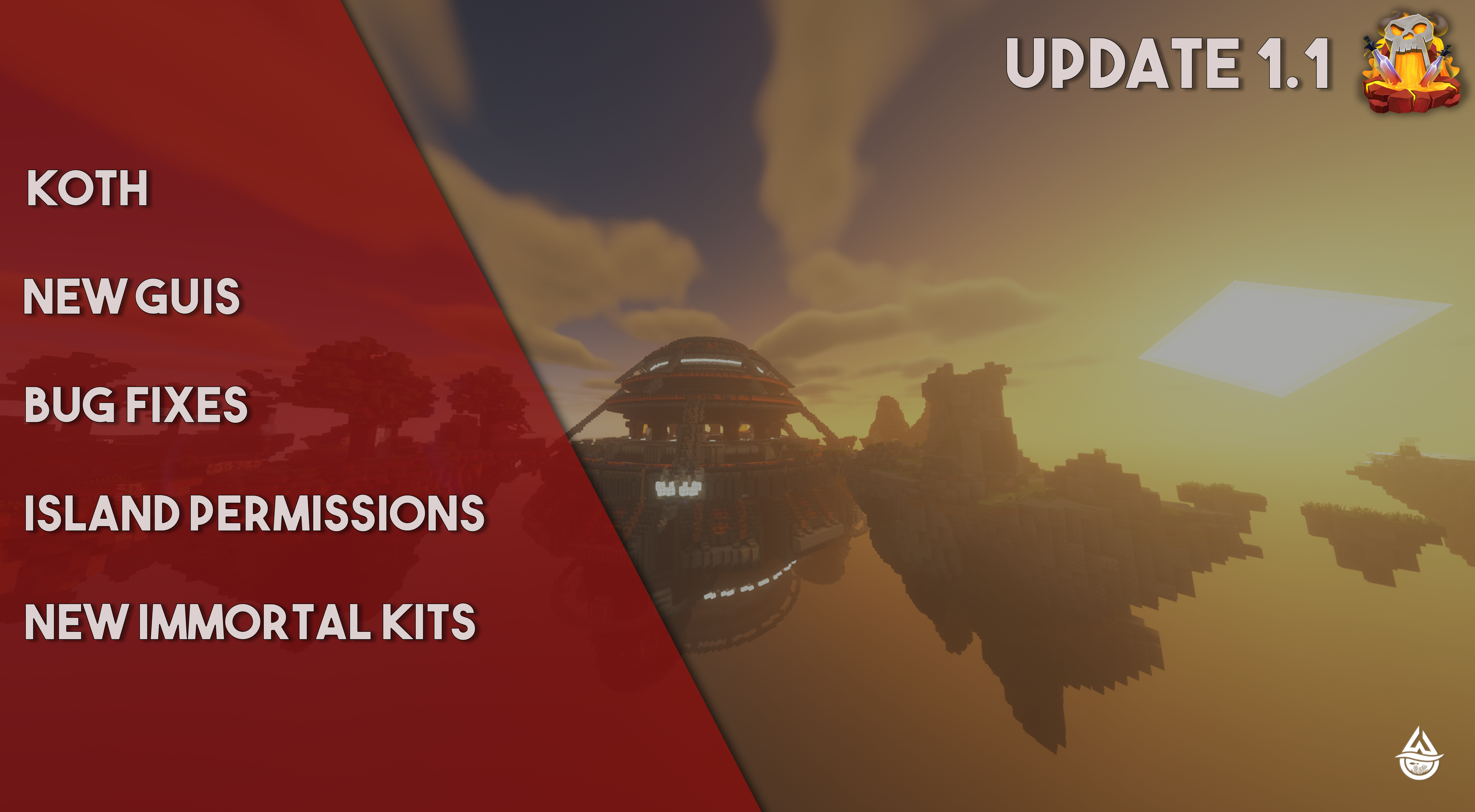 Hey all, and welcome to Update 1.1! We've been a bit busy these past two week, without further delay.. here we go:

Hunter and Wrestler iKits
Thats right! New iKits! We've added two new iKits to the mix, Hunter and Wrestler. Currently Hunter is available on our store at https://store.hellbounds.net. Below are the set effects for both of these kits as well as their tier 3 items: King of the Hill (KotH)
Thats right, King of the Hill is back! We've brought back a very highly requested feature with a few changes. First, KotH has two modes, Free for all and Team. These modes should be fairly self explanatory. In addition to that, KotH will move around the warzone now.

Island Menu and Permissions
Up next, the island menu has been given a complete overhaul and the permissions around your island have been too. This should allow for users to have MUCH more control on what each rank can do on your island. With over 35 permissions to set, be sure to go through them all and configure them to your liking! Kit Menu
The kit menu has been given some much needed attention, and has a whole new look. Should be a bit clearer on when you will unlock things now! ​
Other notable changes:
• Stonemason has been nerfed to no longer allow infinite farming of resources
• Hanging Item frames should no longer be effected by creepers
• Quests that were requesting "Diodes" now have the proper name of "Redstone Repeater"
• Sharpness 5 and Protection 5 have been removed and prevented from being used
• Thief has been nerfed.. three times! Hopefully this makes it a bit more balanced for all of you!
• The highly annoying AFK sounds will no longer until the last 30 seconds
• Kit Noob will now be detected when already claimed for the quest
• Kit Tiers are now properly working and displayed
• Tab List and /list are now properly ordered
• Fixed a brief issue where all unlocked iKits disappeared (Whoopsy!)
• Fixed several small issues with Chunk Hoppers
• Efficiency 5 now can be applied to items
• All old rank names have been removed and replaced with the proper ones
• Random Storm Gens now function properly
• VIP ranks will now have increased speed in Auto Smelters to match Eternal
• Ore Seeds now require the player to be sneaking to break them in hopes of preventing players from accidentally breaking them
• Mobs can no longer trample crops
• Mobs no longer count as double in quests
• Removed "Combat level" references in the /death menu
• Uncharged boss eggs now accept Ore seeds
• Players can no longer join MW and have everyone else leave to get free Immortal Artifacts
• All Ore Seeds range has been increased by 2
• Fixed several dupe issues
• Fixed several potential crash issues
• Many, many, optimizations
Last edited by a moderator: Jan 14, 2022

Very pog, so excited for this update with specifically the island permissions

IsItFanno said:
Very pog, so excited for this update with specifically the island permissions
Click to expand...

definitely agree that this update was pog!!

Please tell me the expel glitch has finally been fixed

MarikIsGod said:
Please tell me the expel glitch has finally been fixed
Click to expand...

i dont think so
A

How can I play hellbounds

Alejandro25 said:
How can I play hellbounds
Click to expand...

You can join using the ip Hellbounds.net with the versions 1.8-1.18
You must log in or register to reply here.