Welcome, one and all to the post that we've all been wanting to make for months now. Whilst I do want to mention that this is, by no means, the final exhaustive list of all of the changes we made to TFI, it should be noted that these are the more notable ones.​
Challenges:

Challenges have received a complete and utter overhaul as barely a shred of the old system remains. Whilst I can't mention all of the notable changes here, I'll save a few of the bigger ones here for you all to enjoy.

With this new system, you'll see a shake-up of the traditional Hellbounds challenge structure. Challenges now follow a stage and task format, versus the "do x tasks" format found in the previous challenge system. But what does this mean for you, I hear you say? Well, basically it means that certain challenges (such as larger campaign ones) will have multiple tasks to complete across multiple areas (some are even themed!) for you to complete before you complete further tasks, and then finally, the challenge overall. This may mean that a few of your older challenges have been bundled together, and some of the.. less.. desirable ones have been re-worked or removed completely altogether (like who wanted to craft paintings, anyway?). This also means that passes have more of a worth now, as they skip more than they were ever able to before. 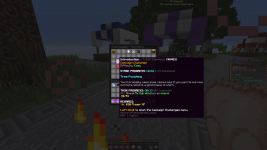 But what about PvP-based challenges? And what about the more island-centric grind challenges? Well, for the people that play in a specific way, I have some fantastic news for you. Starting on TFI, you will be able to pick the challenges that you wish to do.

After certain campaign challenges, you will be presented with the option to pick as to which campaign challenge track you'd like to do next. Want to do a mining challenge? Sure, go ahead! Want to do a PvP challenge next? Go right ahead! Just keep in mind that because you picked a specific route doesn't specifically mean that it's going to be the easier one.

Banking is a brand new system added to TFI. When exploring ways to provide more worth to currency, we decided it appropriate to bring a risk to losing a fight in the warzone in the form of currency loss. Want to prevent this from happening? Head to the Banker and start the Providing to the Banker challenge to begin your banking account journey straight away! However, we know that not everybody will like this system straight away, but we hope to expand it a bit more in a future update with community feedback so that we can get it to a point that everybody will enjoy.

But what does opening a banking account actually provide to you? Well, other than safety from losing your money in the warzone, opening a bank account allows you to receive an interest rate (dependent on your banking tier), which will allow you to receive money back from the Banker's investments! Free money for doing nothing? Sign me up! 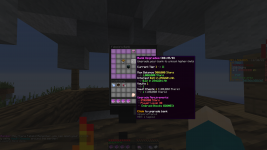 Using your banking account, you can also upgrade it not only for your ability to receive interest and expand the limits of your deposits, but you can also increase your personal vault sizes! Oh, did I mention that vaults have been completely redone in an easier to navigate way that will never leave you scratching your head whilst attempting to navigate it ever again? 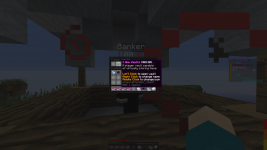 We heard you loud and clear. You wanted easier and better ways to support our server, so we obliged. Using /vote list you can view a list of sites you can vote and support for Hellbounds on. When you vote for us, you earn 1 Voting Point that can be spent on any item in our /vote shop free of charge and without any chance added. Now, there has never been an easier way to support our network and earn yourself goods at the same time! Who said a little quid-pro-quo hurt anybody? 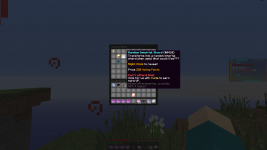 Psh, dropping items on the ground makes them dirty, didn't you know? Now, you can use /trade and trade your ill-gotten-gains to nearby players to your hearts content without there being a risk of another player coming past to steal it!

Now I won't talk about this much extensively here as it was already detailed in the new discord announcement, but there is a brand new nickname system for all infernal rank users to love and enjoy. It is important to note that you can only switch nicknames whilst being in a pvp-free area, and it is also important to note that you can only set your nickname and skin to be something random.

Before we get on to the misc. changes, I think you need to bask in the beauty of TFI a little.

Tempted to delete your message and claim first.

Eternal
Immortal
Demonic
I'm not even halfway through all that "Miscellaneous Changes" and I'm kinda impressed how many little details and problems you fixed! Like doing /warzone from an island or the fixes for mobarena. It's great to see someone actually wants to fix all the problems and not just the majour ones everyone kept complaining about!
Good Job Guys and I'm hyped for the launch!!!

Staff member
Moderator
Quality Assurance
Enjoy your time on TFI guys!
You must log in or register to reply here.